Showing posts from 2016
Show all

By Linda - November 16, 2016
Canada and Artisanal Mining Artisanal Small Scale Gold Mining (ASGM), recognized as a huge development opportunity in 70+ countries by the world's international institutions, is playing a vital role in eradicating poverty for the world’s poorest and most vulnerable. It is a remarkable sector that deeply touches Canada’s history and development. Artisanal mining played a significant role in creating wealth and economic diversity in early Canadian history (~1850 - 1930), and the evolution of that sector into Canada’s modern natural resources industry tells a good part of the story of the evolution of Canadian governance systems.
Post a Comment
Read more

The Artisanal Gold Council works to improve the health of miners worldwide. As part of ‘ Mejorando la Pequeña Minería Artesanal de oro’  (MEJORO), our 5 year project in Peru, we are working with local miners to improve practices and reduce environmental and health impacts at processing sites. Mercury vapour and respirable silica dust exposure have previously been highlighted as key health concerns within the Artisanal and Small-Scale Gold Mining (ASGM) sector, and the Minamata Convention specifically targets the elimination of mercury use in the sector. Our integrated approach to improving occupational health not only seeks to raise awareness on health issues in ASGM, but also to provide practical and accessible alternatives and the necessary training and resources to assist artisanal miners in improving their work environment.
Post a Comment
Read more

The importance of determining gold purity   is profoundly understood by the world’s refineries and is the basis for all final gold trade. However, in the field, the actual quantity of gold in a piece of dore (raw gold with some impurities) is difficult to ascertain to anywhere near the degree used by the world’s refineries; accuracy can be off by as much as 10 or 15% in the artisanal mining sector. Purity of gold is most commonly expressed in either percentage (%), as in “five nines gold” being 99.999% gold, or in karats, as in 24 karat gold being more than 99.95% pure. Gold considered London Good Delivered is 99.5%.
Post a Comment
Read more

The 4th Meeting of Artisanal Miners of Chaparra 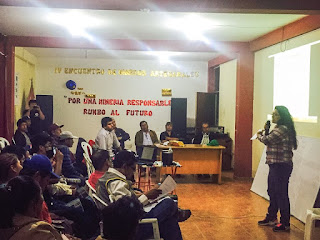 Located in the Chaparra District of the Province of Caraveli, in the Arequipa region of Peru, Chaparra is a small town full of warm people. Their main income is gold mining; many   Chaparrans have dedicated multiple generations to this sector. On Sunday June 12, 2016, the 4th Meeting of Artisanal Miners of Chaparra was held within the activities to celebrate the month of the 199 th  Anniversary of the Chaparra District.
1 comment
Read more

This year's UN World Water Day focuses attention on the close relationship between water and jobs.  This is particularly true for the  Artisanal and Small-Scale Gold Mining (ASGM) sector where, for more than 15 million workers,  water plays an integral part in processing operations, but also has important linkages to environmental and human health.
Post a Comment
Read more

Artisanal mining and the SDGs

The September fanfare of agreeing to 17 Sustainable Development Goals (SDGs) is over. It’s 2016, and the clock has started ticking. A starting point to realising the SDGs requires an understanding of where and how our work intersects with them. The mining sector - large, medium, small and artisanal – is no exception. How the artisanal sector in particular unfolds and develops in the next 15 years will affect our collective ability to reach the SDGs.  While developments in Artisanal and Small Scale Gold Mining (ASGM) can be linked to all of the SDGs, 8 of the most pertinent ones are discussed below, reflecting on what this means for the sector and for the Artisanal Gold Council (AGC).
Post a Comment
Read more

Press release Despite progress, global mercury agreement undermined by uncontrolled production and trade Groups ask governments to fast track ratification, early implementation of Minamata Treaty Amman, Jordan, 9 March 2016 —Commitments toward stronger global mercury controls are being hampered by illegal, unreported and unregulated mercury production and trade, an international NGO coalition revealed today on the eve of a UN mercury treaty meeting in Jordan. The Zero Mercury Working Group (ZMWG), of which the AGC is a member, said that global efforts to reduce emissions of mercury may be derailed if gaps in mercury production and trade controls are not addressed before the treaty enters into force. “Trafficking in mercury is not like selling potato chips,” said Michael Bender, ZMWG International Coordinator. “There are well known
Post a Comment
Read more

Women’s contribution and priorities in artisanal and small scale gold mining are often overlooked. This is in part due to the informal nature of the sector, existing inequitable gender norms and in part because mining continues to be understood in many places as a sector of the economy requiring stereotypical male characteristics. Yet women form an important part of the work force in the sector, playing a wide variety of roles. As in many sectors, women earn less for their work when compared with men. Gender training in Peru The artisanal gold mining sector offers the opportunity to narrow existing gender gaps , but also runs the risk of widening them, if this is not a priority. Globally, the world economic forum estimates that it will take 117 years to achieve gender parity.  AGC is committed to accelerating the closing of the gender gap in ASGM. Gender equity is not a by-product of our work, but rather an explicit target. Women and men are both integral for the development o
Post a Comment
Read more
More posts